Lessons from My Father’s Passing 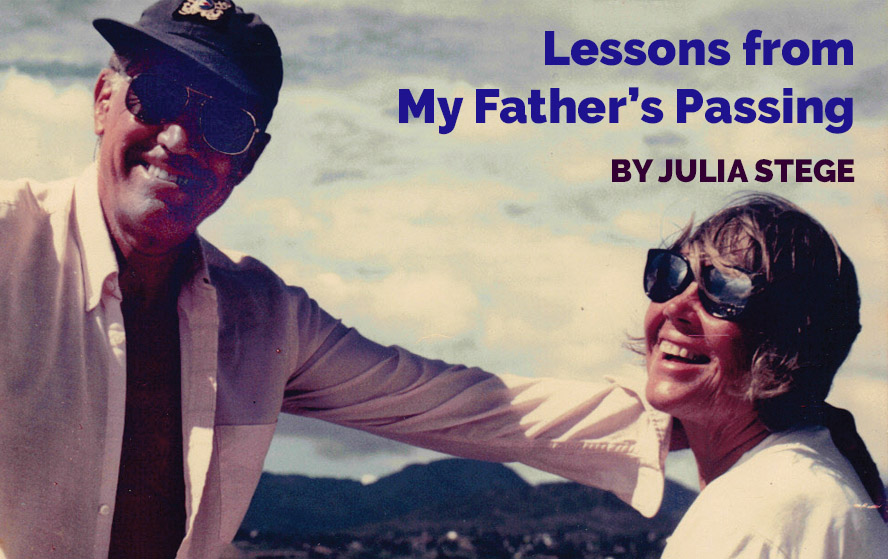 To say that my relationship with my father was strained would be a bit of an understatement. Highly creative, charming, handsome, hilariously funny and always smart, these positive qualities were overshadowed by the fact that the man was a rageaholic narcissist with a mean streak 93 years long.

The effect his behavior had on my mother, two brothers and myself was palatable and deep. And while through my personal development work (especially Landmark) I made amends with the man, I would be lying if in the last years of his very long life I hadn’t secretly wished he would just quietly pass and save his family from the financial and emotional strain of his unending demands.

And yet upon his passing last month, I experienced a lot of deep unexpected grief.

Suddenly all the resentment that I struggled my whole life to transcend was gone. In its place were all the good things he had done and said, all collected into one big memory clump. And I’ll tell you, I felt really sad. I missed him.

There was nothing to regret in terms of our relationship, really.

In his final years I had done as much as I could to get along with him, and, I did more for him than he probably deserved. Like helping him move closer to my brother, Alex (the saint who took responsibility for my parents in their last years). Like when I dropped everything to visit him in the hospital, twice. And especially when I designed the covers for his two books of poetry, Whistling in the Dark and Singing in the Sun, both of which can be purchased on Amazon.com (see G. Henry Stege under Books.) 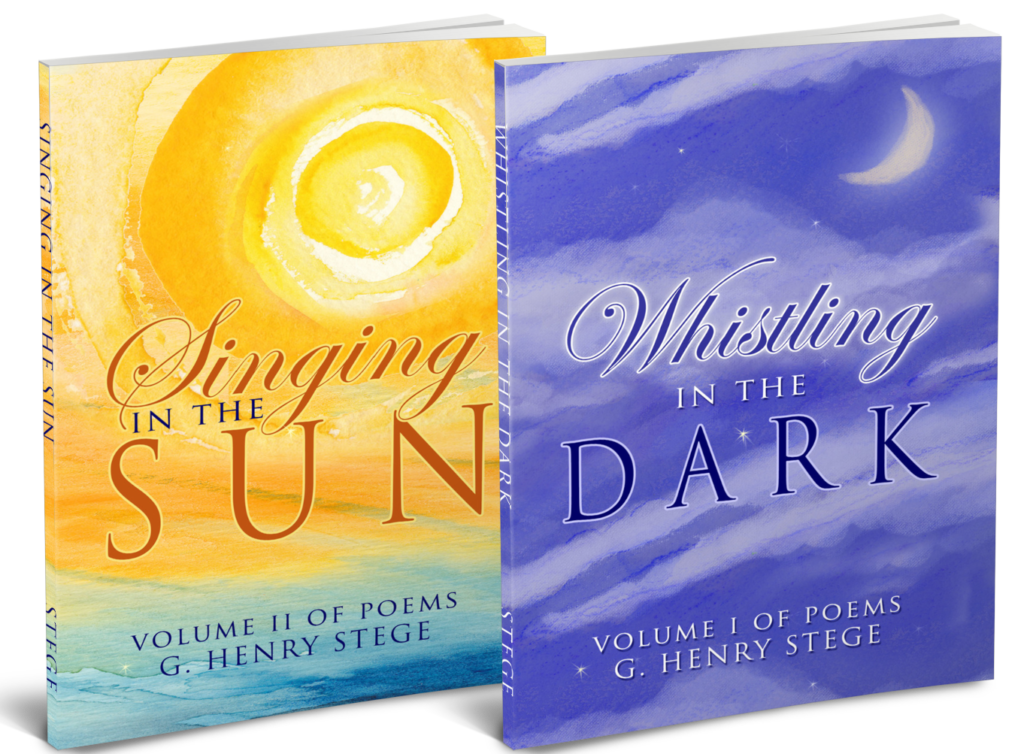 The reason I helped him get those books designed and published was because I knew it was a life-long dream of his to be a writer.

The best memories of him from my childhood were listening to him tell funny stories at the dinner table. His characters, clearly based on our family members, went on adventures that inevitably would go terribly awry.

They were highly entertaining tales, he really was a talented storyteller. But when I asked him why he had given up writing (his major at Williams was English and he bragged that he even had an agent at one time) he told me, over and over, that writers couldn’t make any money. He had tried, he had written dozens of short stories and even started 3 novels, but he couldn’t get published.

So when he married my mother in 1951, he gave up writing to become a salesman.

And I mean he completely gave up. He was never seen in front of a typewriter until the late 80s, and only 5 or 6 people his immediate family had read any of his latter stuff until age 89 when he finally published those books of poems. The short stories and novels have never even been read by anyone living.

For some reason he never showed us his writings from that period. Then, the day after his death when my brothers and I were going through his room, I found a file box and opened it. It was packed full of short stories and other writings from the 1940s. It was a bit overwhelming. I just kept thinking, it’s too bad he didn’t figure out a way to get these writings to the world before his death. 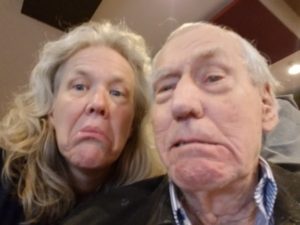 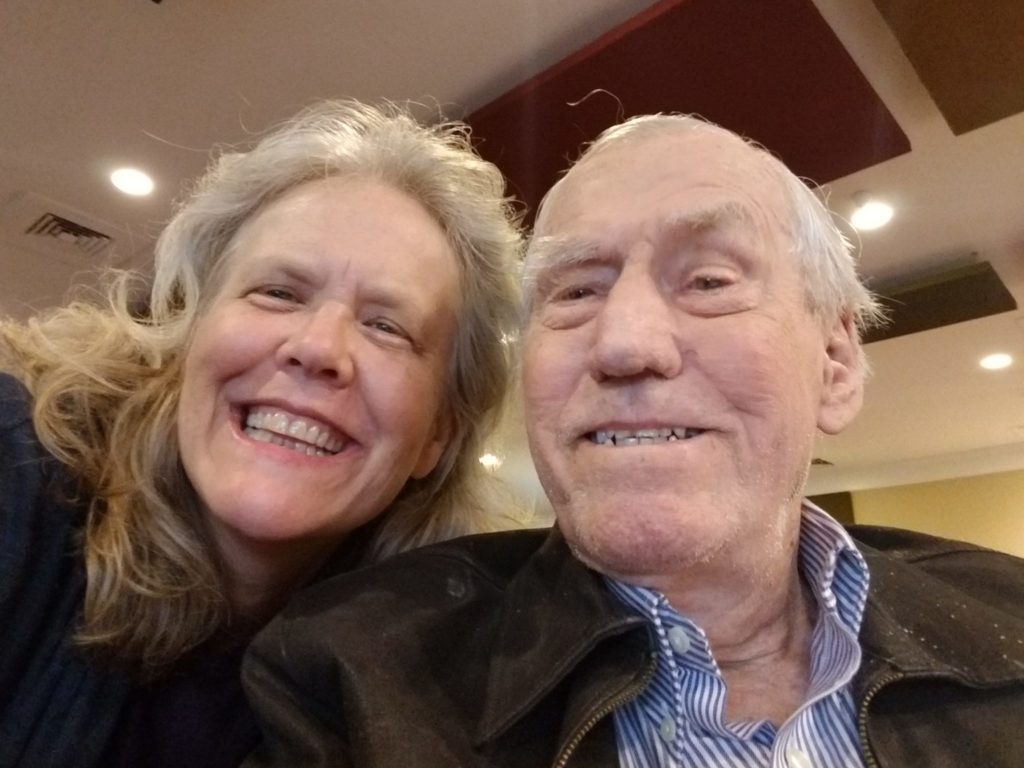 That’s the big lesson I’m taking from all of this, from everything I’ve experienced as the daughter of George “Bud” Henry Stege III; to not let more years pass without sharing my creative inspiration.

Fact is, while I had inherited writing talent, I absorbed my father’s beliefs about failing at writing, and I too have at least three novels in progress, unfinished for decades, that only a couple people have ever seen. I too have this insatiable perfectionism telling my what I’ve written is probably not good enough to be consumed by the public.

In fact, I had so embodied my father’s beliefs about writing that I allowed my clients to suffer for over 15 years without ever offering to help them write their website copy, even though good copy flows out of me like poetry! And until recently, I did not offer writing services to the world at large, only to those who hired me for branding and websites. I’m saying, this was a huge blind-spot in my business, and in my life.

It was as if I couldn’t succeed at writing because my father had given up.

So, I’m not going forward with business as usual. I’m taking the lesson of my father’s life to heart. I’ve begun writing my novel again, the one I started in 1995, and I even had a breakthrough that will help me draw the thing to a close. I have started visualizing getting picked up by an agent and receiving a big check from a publisher. And meanwhile I’m planning to create a website where folks can read a piece of my novel for free and purchase the whole thing if they like it (I guess that’s called self-publishing!)

I’m simply not waiting until, like my father, I’m too old to get my creative self-expression out to the world.

So why am I sharing this story with you? Well, I’m hoping you too can learn the lesson of my father’s passing. Is there some creative self-expression you’ve been keeping close to your chest, showing no one? Is there a book in you that isn’t finished, or hasn’t been started? Is there a website that is simply about your passion that you haven’t taken the time to make, or have made for you? Have you been working at something that makes you income but doesn’t satisfy this deep yearning in your heart?

Don’t let your life pass you by. Maybe it’s a little cliche but our lives are limited and we have only so much time to share what’s most important to us with the world.

I’d love to hear about your hidden, unfinished, abandoned or simply not yet started passion. Share about it here, with me, now, in the comments below. Expose yourself, make a promise you don’t know how to keep, that you will start, keep going, and finish that project. This may just be the next (or first) step you’ve been waiting for.