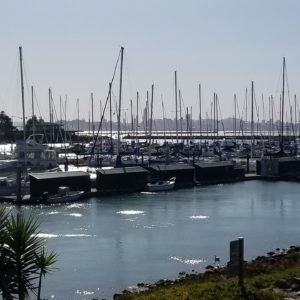 The view from our hotel room at the Berkeley Marina day 1 of our evacuation.

At 4 am on Sunday, October 27 my cell phone blasted a warning that we had to evacuate Sebastopol due to the Kincaid fires 30 miles away.

We were already under evacuation warning and power was shut off across California due to high winds, but Sebastopol, known for good Pinot Noir due to the fog, was so far from the fire that we thought we wouldn’t have to leave. We were wrong, and that’s probably a good thing.

Why a good thing? Well for one thing, as of Wednesday, there was still no power in most of Sonoma County for the 4th day in a row while temperatures were hitting record lows at night. Basic necessities were difficult to find when stores and gas stations were all closed. And the air was full of smoke across the region.

But we were forced out. This was not meant to be fun vacation. We had nowhere to go, but there were sheriffs with megaphones shouting intelligibly into the Sebastopol morning air, and we were getting multiple emergency calls and texts to get out! So we packed up the dogs and our Go Boxes and drove through swirling debris away from home.

Early on in the evacuation process, I had decided to remain conscious and not panic or resist.

I remembered hearing Eckhart Tolle once teach, “Say, ‘yes,’ to this moment no matter what. Even if your house is burning say, ‘yes,’ because it is happening now.”

So saying, “yes,” in my mind, driving down Route 116, my intuition told me to go this roundabout way that turns out saved us 4 hours of stopped traffic jams. We reached the Marin Civic Center before sunrise and tried to nap there. I listened to a guided meditation and got back into my zone. I then drove us to Oakland, found a place to board the dogs, and managed to get us a room for one night at the Berkeley Marina Doubletree, the site of my first date with my husband 20 years ago.

And while this whole discombobulating experience had forced me out of my normal routine, I have to say I managed to enjoy myself.

Definitely a first world type of evacuation! We were warm, fed, powered up and connected, unlike thousands of folks affected by the fires. My husband and I were even having a little honeymoon of sorts, with no pressure to get anything done. And from our balcony, we had such a beautiful view of the San Francisco Bay, Oakland Bridge, Golden Gate Bridge and the city between, that my spirits were lifted despite over 24 hours without sleep.

The second day of our evacuation, we had to leave the Berkeley Marina and find another hotel. I found us a place in Concord by the airport that would take the dogs. Not as nice as Berkeley in my mind, but it was quiet, and away from pretty much everything.

I decided to cancel all my meetings and my weekly mastermind and surrender. I walked my dogs several times a day, something I rarely do at home because we live on a big fenced in property. I relaxed. I took a warm detox bath.

Heck, it was almost like a Zen retreat out there in Concord, California, with a Whole Foods 365 store and Jamba Juice just down the way.

It’s so interesting to discover when you think you have no time at all, and you get evacuated and suddenly you have all the time in the world. There really was a lot of opportunity to get up tight, freaked out and wholly out of alignment. But I didn’t let that happen.

Instead I took things not going exactly right as an opportunity to be present, relax, surrender and enjoy myself… no matter what.

Wednesday came and it didn’t look like the electricity would be back on in Sebastopol yet, so we surrendered even more and asked the hotel to stay another night. Then right after lunch we found out our power had been turned back on. We cancelled our extended stay and headed quickly toward home.

I’m glad to say our home was mostly unscathed. We had left the garden umbrellas open (whoops) and one had broken. There was a lot of leafy debris and a few downed branches, but otherwise safe and sound. Through the heroic efforts of over 5,000 fire personnel, the fire is contained. And I’m doing my best not to slip back into business as usual.

There are things that don’t go my way each day, and maybe that’s a good thing. Instead of resisting what’s happening, I am doing my best to say yes to the tiny frustrations, the difficulties, the sorrows, and even the failures, as well as to the joys, the happiness, and the love.

My aim? To make every day a Zen retreat, no matter what’s happening. To enjoy my life no matter where it takes me, exclaiming, “What an amazing ride!”

What are you saying yes to?

JULIA STEGE, the Magical Marketer, helps spiritual business women and conscious entrepreneurs to clarify and express their purpose through branding and websites that attract their true Soul Tribe online. Start attracting your tribe, often in under 48 hours, with the Soul Tribe Attraction Playbook, available at http://www.getstap.com. If you want to use this article on your blog or ezine, you may if you include an unedited version of it including this entire footer.